Contact Gold (TSX-V: C) acquired 13 projects on the famous Carlin-Trend in Nevada. Big major Goldcorp was one of the first investors in this gold exploration company. We spoke with CEO Matthew Lennox-King in detail about the potential of his projects, the opportunities in Nevada and the gold price.

Last year Contact Gold acquired 13 projects on the famous Carlin-Trend in Nevada. From the beginning Goldcorp invested in your company and they paid 7,5 Mio. Dollar for a stake of 15 percent. This is something very rare. How did this investment of a big major come about? 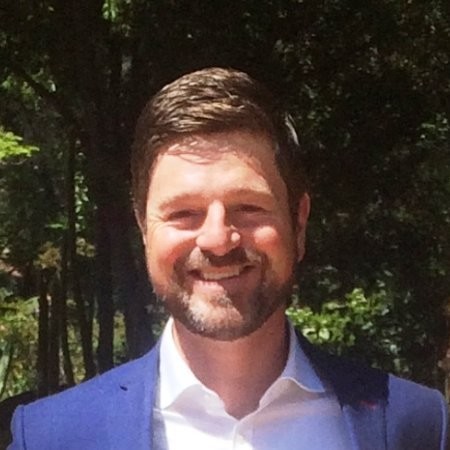 Matthew Lennox-King: Contact Gold was formed from by purchasing 13 properties (2,762 claims) from Waterton Global Resource Management.   Nevada and the Carlin-Trend are very important to major gold miners. Production from the trend accounts for over a third of Newmont’s global gold production profile and half of Barrick’s annual global gold production. A majority of the gold deposits on the Carlin Trend are easily heap-leachable and therefore very cost effective to mine resulting in very low all in sustaining costs (“AISC”), which are highly valued to majors and are why Newmont and Barrick have such large operations on the trend. Goldcorp, Kinross and OceanaGold have all expressed interest in acquiring deposits on the Carlin Trend to bolster their production profile, reduce global jurisdiction risk, and bring their global AISC down. To that end, Kinross purchased the Bald Mountain mine three years ago, which is located on the southern most part of the Carlin Trend, south of our Pony Creek Project.  Both Goldcorp and OceanaGold have a stake in neighboring Gold Standard Ventures (“GSV”)’s Railroad Project (12.7% and 15.5% respectively), which shares the same geology as our Pony Creek, North Star and Dixie Flats projects. Goldcorp took interest in Contact to gain a strong technical team with significant experience in Nevada and a history in financing exploration as well as a foothold on the south Carlin Trend in a new district play that encompasses both GSV’s Raliroad project and Contact’s Pony Creek and North Star properties.

Your flagship project is called Pony Creek. With your first drill program you delivered really good results. For example, you drilled 2.51 g/t Gold over 47.24 meter. May you explain our readers the potential of Pony Creek and something about the history of the project?

Matthew Lennox-King: Pony Creek was owned by Newmont and Barrick in the late 80s and early 90s when exploration was at its peak on the Carlin Trend. Both Newmont and Barrick were focused on drilling  a particular part of the stratigraphy, the Devils Gate-Webb Formation contact, that was then understood to host all of the gold deposits on the northern part of the Carlin Trend. After drilling numerous short- vertical reverse circulation holes on various fragments of the now consolidated Pony Creek project, and never hitting what they considered to be the right stratigraphy, the property ended up in Allied Nevada’s exploration portfolio in the early 2000s. The project sat dormant for 10 years with Allied Nevada before Waterton bought it out of Allied’s bankruptcy in 2016. A historical resource estimate (2006) was calculated for the Bowl Zone containing 1.4Moz @ 1.5 g/t Au. This resource estimate is historical in nature and does not meet modern guidelines to classify as current.
In June 2017 Contact acquired Pony Creek from Waterton.  Through the remainder of 2017 we delivered a successful drill program, hitting gold in 40 of 42 holes. These results were critical in confirming the Bowl and North Zone could be expanded. The results you have quoted are from the first results of the 2018 program and that interval is the best oxide gold interval drilled on the project to date. These results are very exciting because they were step-out holes to the west and north of previous historic drilling and were focused on a structure that seems to contain higher grade oxide gold mineralization. These early results confirmed our target generation completed in 2017 works and opened up the west side of the Bowl Zone for further expansion of oxide gold mineralization at better grade than had been previously discovered. 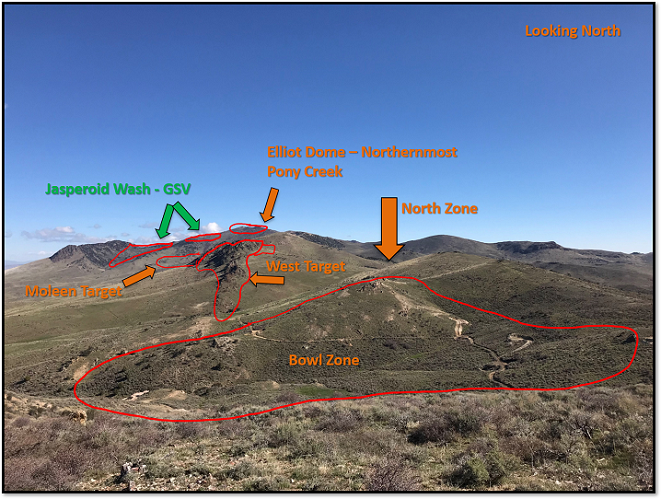 Moreover you identified a mineralized zone, called “West Target”. It is a new discovery on the project. May you tell us what you expect from this zone und what will be the next steps. Is there a coherent geological structure?

Matthew Lennox-King: The West Target was defined in early 2018 based on results from the 2017 exploration program. It is a 2km long gold-in-soil anomaly underpinned by CSAMT anomalies and defined at surface by a silicified jasperoid conglomerate. Critically the footprint of the gold anomaly is larger than either the Bowl or North Zone and trends towards GSV’s Jasperoid Wash discovery (2018) that is extensively being drilled. We know from geophysical data there is a coherent north-south structure that is spatially associated with the gold anomalies defined to date and it is likely the same structure that is controlling mineralization at Jasperoid Wash.
The first set of holes into the West Target were a success with 33.5m of 0.42 g/t Au in discovery hole PC18-018. This new discovery opens up the West target for further drilling along its 2km length, which is very exciting as it represents a brand-new discovery in the same host rocks as Bowl Zone and GSV’s deposits. We have 12 more holes focused on the West target this year that will aim to test some of the other gold anomaly at the extents of the West target and some of the holes will be devoted to further defining mineralization around the discovery hole. 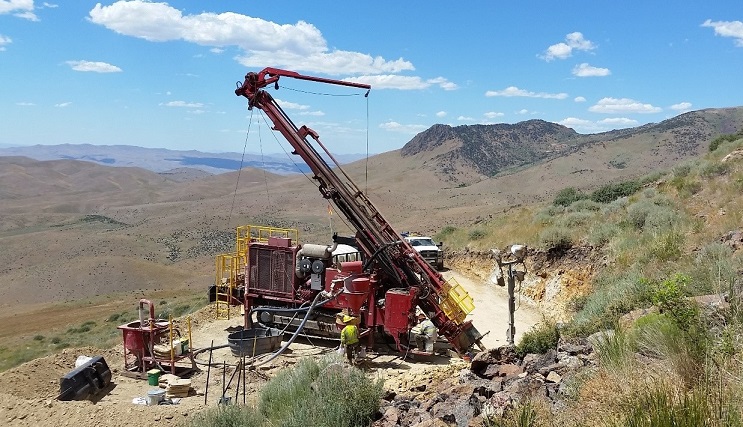 The 2018 drill program comprises 16,000 metres and is expected to run through November. When will the market see new results and what will be the next steps?

Matthew Lennox-King: Results have been coming out on average once each month and will continue through the end of the year. We will continue to drill the newly discovered West Target and further drilling at the Bowl Zone as we work towards a resource estimate there expected in 2019.  We also plan to drill two new areas Elliot Dome and the Moleen Target at Pony Creek. A drill program for the nearby North Star property is also planned in the near term.   North Star is a separate project to the north of Pony Creek, and sits immediately south and adjacent to GSV’s high-grade Dark Star deposit.

Most of the work will be done on Pony Creek. What is your strategy for your other claims on the Carlin-Trend. Will we see a step-by-step approach like or maybe cooperations with other companies? There are some very active mining companies in Nevada and especially in Elko County.

Matthew Lennox-King: With 13 projects we have to prioritize and focus on our best assets for expanding resources and making new discoveries. We will continue to access opportunities that will best bring value to our shareholders and further advance our projects within our property portfolio. Our first year was busy compiling all the historical data for all the projects and drilling Pony Creek. Now that compilation is complete and we have formed a strategy to explore the rest of the properties (Rock Creek, Cobb Creek, Santa Reina, Golden Cloud, South Silver Cloud etc.) outside of the south carlin projects (Pony Creek, North Star and Dixie Flats). 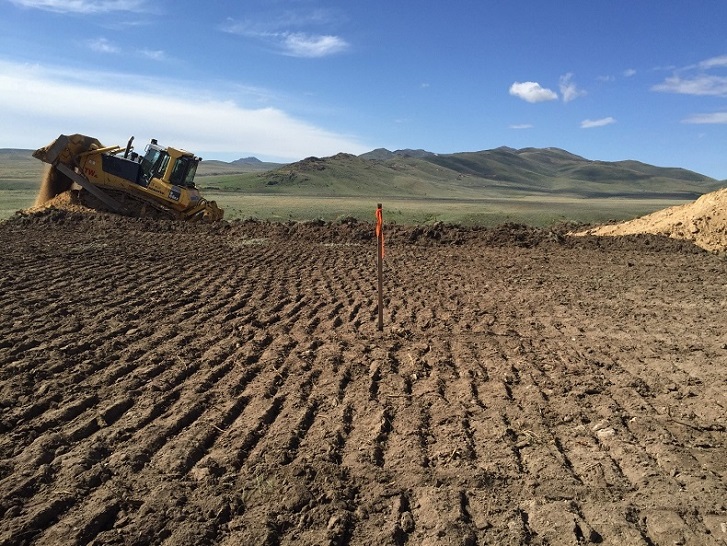 Gold has lost some of its value this year. The Gold price fell below 1.200 Dollar per ounce. Especially the traders and speculative investors continue to bet on ongoing falling prices. As a geologist and the CEO of the company: What do you think about the current situation?

Matthew Lennox-King: The current economic climate for gold similarly illustrates the need to be in safe and low-cost jurisdictions where miners can operate at a profit at $1100-1200 gold.  When we started Contact Gold we were focused on “Tier-1” jurisdictions (Nevada, Ontario, Quebec).  Because these jurisdictions survive downturns, and depressed metal prices, because the infrastructure is already in place and the regulatory bodies offer a safe and streamlined path to production. During the last downturn all gold majors focused in on their key low-cost producing mines/jurisdictions and Nevada proved to be critically important for Newmont, Barrick and others.
Additionally, all of these producers are now seeing their production profiles decline, with some of them steeply declining. They will need to add deposits in these Tier-1 jurisdictions, which puts Contact in a good position and I also believe overall it will be good for gold.
The gold price (and the exploration industry) slowly increased from 2002 – 2008 after the tech bubble. I think the expectation that gold would go right back to the frothy 2011 $1,900/oz was unrealistic coming out of the downturn in 2016. I would prefer to see a slow, steady increase in gold price with some healthy dips.

(Please read our Disclaimer below)

The original interview was translated into German. Our German disclaimer is binding.